In Tragedy, Kindness: Vigils in the World 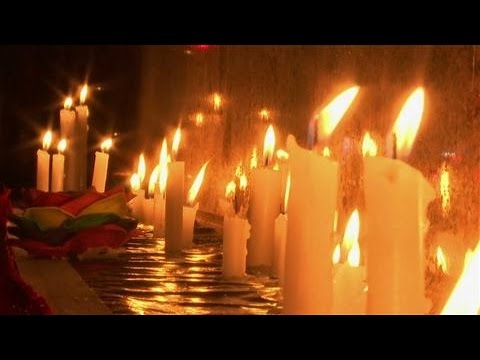 In the wake of the Orlando mass shooting of the Pulse nightclub, which left 50 dead and 53 injured, many critical, the world cried out against this injustice and stood in solidarity and vigil with the victims. In the past, such a reaction may never have happened, due to the LGBT connection, and the killer may have been championed, but times are a changing, and love is blooming. We tribute this post to Orlando, and tell of some of the Everyday Kindness that is being spread.

Therapy dogs have been flown into Florida from all over the US to do what they do best: provide comfort and support. Funded by the Chicago-based Lutheran Church Charities (LCC), these dogs previously comforted victims of the Sandy Hook Elementary School in Connecticut.

“Everyone down here has been affected by this. Everyone loves petting the dogs. It helps them talk. When you pet a dog, your blood pressure goes down and you relax. When you relax, there’s a greater chance that you’ll want to talk about what you’ve been through.”

A GoFundMe page has raised millions for the victims and families affected by the tragedy, becoming the most successful page ever on the site. All over the world vigils, rallies, and tributes are being dedicated to the shooting. A vigil and rally was held in Los Angeles, US, where Lady Gaga made a speech on solidarity and love.

In London, hundreds gathered in the streets for their own tributes, waving flags reading, “We’re queer, we’re here, we will not live in fear”, or singing gay choruses. In Antwep, Belgium, Adele dedicated her concert in honor of the victims, along with the Dixie Chicks. Hundreds gathered in New Orleans, Mississippi, US, for a candlelight vigil.

In Seattle, the rainbow Pride flag was raised on the space needle, and lowered to half-mast, a symbol of solidarity also seen with national and military flags. Other structures, such as the Paris Eiffel Tower, a great bridge in New South Wales, Australia, and the One World Trade Center in Manhattan, US, lit up in rainbow colours in their tribute.
Thousands have donated blood for the surgeries of victims, with blood storage capacity reaching maximum, which is rare. Even then, people kept lining up to schedule appointments for future donations.
Meanwhile many companies offered their own form of tribute. Calvin Klein offered its condolences over social media, as one of its employees was a victim. Disney, its parks known for being a beloved place of the LGBT community, donated $1 million to the One Orlando fund started by Orlando Mayor, Buddy Dye, as well as setting up free accommodations for friends and families in their Orlando Park. JetBlue offered free flights to victims and family members.