Heroes of the Past: Karl Landsteiner 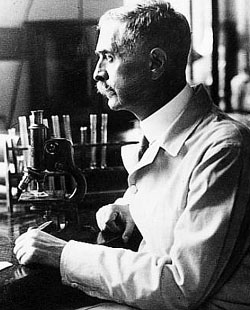 Today’s Hero of the Past is Karl Landsteiner (1868-1943), father of transfusion medicine. We make this post in tribute to World Blood Donor’s Day, and urge you to read our informative post on it from last week and to go out and donate :). Every drop counts!

Karl Landsteiner was born in Vienna, Austria, in 1868. His father, a renowned Viennese journalist and editor-in-chief of Die Presse, died when he was six, leaving his mother to care for him alone. The mother and child were close and kept a close relationship until her death in 1908. She cared for him deeply and raised him fiercely, pushing him academically.

Even in his early academic career, Karl had an interest in the nature of blood, writing an essay on the composition of it in medical school. He was bright and graduated with his MD at age 23, travelling immediately after to study under other famous scientists of the day. From 1891 to 1893, Landsteiner studied chemistry in Würzburg under Hermann Emil Fischer, in München under Eugen Bamberger, and in Zürich under Arthur Rudolf Hantzsch. He often couldn’t find research jobs however, and would pay his living by doing autopsies at morgues.

Transfusion was not a new subject and had been experimented before, but little was known of why some operations failed while others succeeded. Blood types had not been discovered then, but that changed with Landsteiner. In 1900-1901, while working as an assistant at the pathological-anatomical institute of the University of Vienna under Anton Weichselbaum, Karl found that the blood of two strangers had clumped together, or agglutinated,

He studied the sample further, finding out the effect was due to the contact of blood with blood serum, specifically the antibodies of said blood. From this, he discovered the three blood groups of A,B, and O, or C. Experimenting, he noted blood transfusion between people of the same blood group, (or the universal one), did not lead to violent effects, while different blood groups did. This discovery was vital for transfusion medicine and led to the first successful and medically explainable blood transfusion in 1907 by Reuben Ottenberg at Mount Sinai Hospital in New York.

Karl Landsteiener laid the foundation for countless medical procedures that would have been impossible without blood transfusion. Countless surgeries, especially their safety, trauma care, and child-birth and child-care procedures, would not be possible without this man.